The little church in the meadow in Duck Creek Village, Utah. 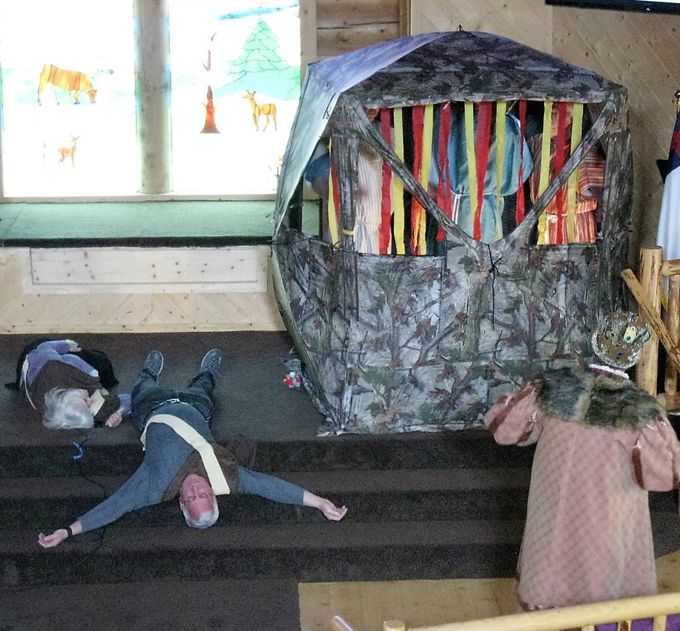 And the moral for the story is, "TRUST GOD IN EVERY SITUATION YOU FIND YOURSELF IN FOR GOD IS IN CONTROL."

Narrator Chuck Brechler
Narrator Chuck Brechler reads scripture from Daniel 1-3 while King Nebuchadnezzar listens.
Meaning of the king's dream is revealed by Daniel.
Daniel correctly interprets the King's dream and earns the king's respect.
The king bows to Daniel in thanks.
Daniel helps the king solve a problem having to do with bad and mysterious dreams.
Guards enjoy interacting with the congregation.
The guards enjoy a lighter moment before they will have to follow the King's direction and throw Shadrach, Meschach, and Abednego into a fiery furnace.
Shadrach refuses the king's command to bow.
Shadrach tells the king that he and his two friends will not bow down to false gods made of gold.
The king is not pleased.
The king expresses his anger with the opposition of Shadrach, Meschach, and Abednego and tells them again that they must bow down or die.
The guards throw the three into the fire.
The furnace is heated seven times hotter than normal because the king is so furious with the three men.
"How can these men be alive?" wonders the king.
King Nebuchadnezzar is amazed when he sees not three, but four men walking around, unharmed, in a fiery furnace that just killed two guards.
The king directs the three men to come out of the fire.
The king touches the clothing of the men and marvels that not even a hair on their head is singed.
The king praises the God of Daniel.
"Praise be to the God of Shadrach, Meschach, and Abedgnego, who has sent his angel and rescued his servants," exclaims the king.

Thank you, Sharon! See you soon!

I will bring a crab salad for the picnic

Pastor Baden’s Memorial Day sermon was one of the best sermons I’ve heard in my entire life! Wish I was there to hear it. I hope those who were there appreciate his message. God Bless Pastor Baden.

Hi Chris: Church doors are open and we are holding in-person services every Sunday 11-noon with Fellowship following services. We look forward to seeing you soon!